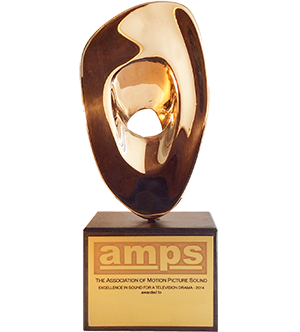 LONDON, 26TH MAY 2021: The five TV dramas nominated for the AMPS Television Drama Awards 2021 are:

The final ballot will open on 28th May and close on 11th June.
Plans are currently being developed for a post-COVID physical AMPS Awards ceremony later this summer to celebrate the winners and officially present awards for Television Drama, Factual Film and Technical Awards as well as the AMPS Fellowship.

AMPS Chair, Andrew Wilson said:  “I’m delighted to see that once again, the AMPS members have voted for a diverse group of productions as the nominees for the TV Drama Award. This year’s long-list was a tremendous showcase for the ever-higher standard of work that TV sound commands today, and the nominated titles illustrate that perfectly. Predicting the winner won’t be easy!”