After a lifelong career in Pinewood Studios Sound Department, I am now a guest tutor and lecturer at the NFTS, and various other Film Schools in Europe.

Elected a Fellow of the BKSTS in 1992

Awarded Life Membership of BAFTA in 2007

This AMPS Fellowship is awarded for services in the formation and subsequent running of the Association.

From February 1988 to June 1989 Graham served on the working parties set up to investigate and organise a suitable association or guild to represent those working in Motion Picture Sound.
Graham's attendance at those meetings was exemplary, his contribution of ideas was prolific and clear reasoning in debate, influential. At the foundation meeting of the Association on the 25th of June 1989 he was elected to the first Council, and has served continuously ever since.

His support of the Association, despite the pressures of work, has been exceptional.
His technical contributions on Sound Technology, the organisation of Theatre 7 film shows and his liaison with Pinewood management for provision of meeting and function venues has been invaluable. All this has benefited AMPS and has played a significant role in promoting it as a prestigious industry Organisation.

This award is the result of a ballot of Council Members. 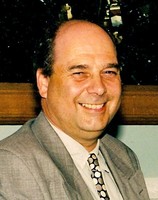